4 Rolls Turn Into 8 Rolls in Highly Rewarding Bonus Round

Kanguru Casino released an interesting video on 22nd August, regarding a certain bonus round in Monopoly Live. It is not that impressive when talking about maximum wins, but it is interesting to see how 4 Rolls turned into 8 Rolls in a single outing on the board. Plenty of Doubles were seen, although Mr Monopoly did not make the right stops on every single roll of the dice.

Four Rolls Turns Into 8 Rolls Thanks to Doubles

The host of the round was involved in a discussion with one of the players, as Monopoly Man was reading his papers when the Wheel stopped on the 4 Rolls segment. The discussion was immediately terminated and the old man hopped from his chair to go to the board. Before he started his walk, random bonuses had been added on random fields on the board.

The first roll took Rich Uncle Pennybags to Kings Cross Station, rewarding players with a 5x multiplier. The second roll of the dice delivered double sixes, giving all competitors one extra roll and taking the old man to the Community Chest, where a cash prize had been waiting. What is important to say is that there had been a total of 4 doubles during the round, giving players a total of 8 rolls of the dice.

Taxes and Jail time Take Away Some of the Winnings

When talking about the winnings, they hadn’t been that big, especially because Mr Monopoly landed on a couple of really bad segments of the board, taking away cash from the players. After taking a break at Coventry Street offering a 10x multiplier, and making a quick stop at Piccadilly, where a 9x multiplier had been waiting, Monopoly Man missed the 250x multiplier for one spot and ended up on the Super Tax segment, taking away some of the winnings from the contestants.

Even though Rich Uncle Pennybags had passed the Go field and doubled all the multipliers, he did not deliver big wins to players. His next stop was the Jail, and after that he went to Marlborough Street, delivering a 10x win. The final roll of the dice delivered the biggest multiplier of the round, awarding gamers with 20x.

All in all, not a bad round, but if only Mr Monopoly was a bit more careful, he could have avoided the Super Tax field and drove the winnings through the roof with a 250x multiplier. 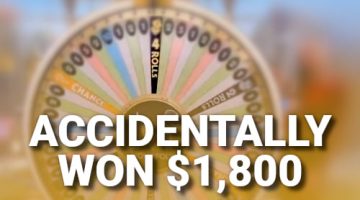 On 23rd August, RiiSki, the online gambler that has around 20k followers on his YouTube…