We all know that Monopoly Live is an extremely exciting game show that delivers massive wins to loads of players across the globe. However, multipliers that go over 2,000x do not occur as often as we would have liked. Thus, we are ecstatic to explain this amazing win.

On June 23, Monopoly Man and his fellow host brought plenty of good luck to all 643 players that had placed their bets on that particular round. Two successive spins of the Wheel resulted in Chance and the 4 Rolls Bonus. In the end, the total multiplier was 2,280x, and the total prize pool was €1,267,395. The biggest individual win of the round was around €95,000.

At the very beginning of the video, Rich uncle Pennybags was sitting in his chair, writing something down in his notepad. Just when the host was about to spin the wheel, the old man asked if it was time for the bonus round to occur. The smart-looking host stated that he really hoped it was. Both of them had been wrong, because the Wheel stopped on the Chance field, delivering a 10x multiplier.

For the following spin, the host asked all contestants for deep breaths, begging the Wheel to stop on the 4 Rolls bonus. Lady Luck decided to grant his wish, stopping the Wheel on the 4 Rolls segment. Monopoly Man boosted all the fields with a 10x multiplier before the beginning of the round. The first roll of the dice delivered doubles. Even so, because the dice had displayed two sixes, the old man was obliged to go straight to Jail.

Mayfair for the final stop

Despite the fact that the first stop on the board had been Jail, Rich uncle Pennybags was not discouraged. No doubles on the second roll. However, the dice took him straight to Northumberland Avenue, collecting a 60x multiplier. His next stop was The Strand, where a 70x multiplier had been waiting.

The fourth roll brought big numbers, allowing Mr Monopoly to go all the way to Oxford Street, adding a 150x multiplier to his tally. He missed Regent Street (500x) for a single field. Even so, the old man got pretty close to Park Lane (500x) and Mayfair (2,000x), needing either a seven or a nine on his final roll.

Again, Lady Luck had been there to assist the players, and the dice made Monopoly Man walk straight to Mayfair, collecting the biggest multiplier of the round.

If you enjoy playing online slots then you should check put our Monopoly Slots reviews. 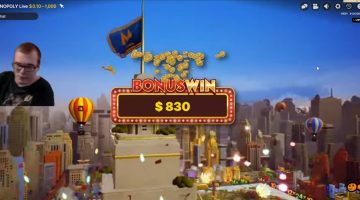 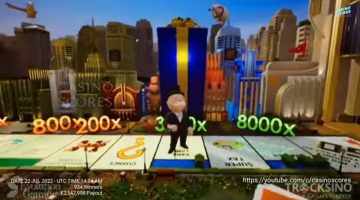 Another exciting story is heading our way straight from the Monopoly Live studio. This…

We are bringing you another interesting story from the Monopoly Live studio, thanks to…

June is proving to be a very hot month for all Monopoly Live fans.…

Once again, we are taking you to India for another exciting round of Monopoly…