Monopoly Live is a game of chance and your entire bet depends on the way someone spins the Monopoly Live Wheel. Even though everybody hopes to see Mr Monopoly on the board after almost every spin of the Wheel, it does not happen that often.

There are not many players who can say that they got either of the bonuses 3 times in a row. Well, this May, we met a young man who succeeded in landing the 2 Rolls bonus three consecutive times. Our new friend is Ttdante, and he was kind enough to share his video with the rest of us. This success story involves our hero, Ttdante, two different hosts, and Monopoly Man.

Host switches up his spin for the first 2 Rolls bonus

The video posted by Ttdante is a long one, but we will focus our attention on the period when the three 2 Rolls occurred. Before the wheel stopped on the 2 Rolls segment for the first time, Ttdante had been talking about how many twos had been landing at the time. At that point, our hero noticed that the male host had switched up his spin. We cannot say whether this was done on purpose or not, but we can say that this switch resulted in a 2 Rolls Bonus.

That made the old man stop drinking his tea. Since Ttdante requested him to go out there and bring him a 1,000x win, Rich uncle Pennybags went straight to the board. Even though Ttdante had hoped for many doubles, none occurred. After stopping at Chance (5x), and Marylebone Station (5x), Mr Monopoly went back to the studio, carrying a 10x total multiplier.

No doubles in the following 2 Rolls either

Meanwhile, the host got changed, and it was time for her to do some magic. While ttdante talked about the fact that he had never been in a 4 Rolls bonus round, the Wheel stopped on the 2 Rolls segment for the second time. Our hero celebrated back-to-back bonuses, and the old man went to the board again. Another round with no doubles. Again, the first roll took Monopoly Man to Chance, only this time the reward was 3x. Community Chest was his next stop (5x), securing an 8x total multiplier.

In the third spin of the Wheel, Ttdante hoped for a Chance. Lady Luck thought otherwise, stopping the Wheel on the 2 Rolls segment for the third time in a row. Mr Monopoly did not have time to rest, and he was forced to go to the board once again. The Angel, Islington (3x), and Northumberland Avenue (7x) were his two stops. In total, Ttdante collected a 28x multiplier and pocketed $2,800 in the process.

You can watch all three rounds play out here and share the excitement. Note that they start at 07:15.

If you enjoy playing online slots then you should check out our Monopoly Slots reviews. 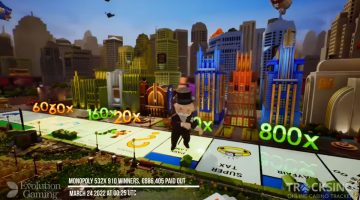