This has been a crazy year for the Monopoly Live Big Wins section, and it is only fair to finish 2020 with another amazing story. Thanks to the video released by Global Casino Advisor, we have witnessed a quite rewarding round of Monopoly Live.

The Wheel stopped on two Chance segments, and, immediately after that, on the 4 Rolls field, taking the old man to the board with a tasty 8x multiplier. Due to the fact that there had been one Doubles, there were 5 rolls of the dice, delivering a total multiplier of 176x.

While our host was discussing the statistics with players about how many spins it took for the previous 4 Rolls or 2 Rolls Bonus, and while Mr Monopoly was reading his paper, the Wheel stopped on the Chance segment. Monopoly Man put his papers down and revealed a 2x multiplier.

The host hoped that the following spin of the Wheel would result in one of the Rolls Bonus, and he even asked Rich Uncle Pennybags what he thought when another Chance segment was landed. This time, the old man was a bit more generous, giving players a 4x multiplier. Just when we thought that the round was over, the Wheel stopped on the 4 Rolls segment, taking Monopoly Man to the board.

Five Rolls for a 176x Multiplier

As Mr Monopoly was going to the board, the host exclaimed after hit to go for the doubles. Interestingly enough, the old man listened to him, and the first roll of the dice delivered doubles, two threes. Sadly enough, this was the only doubles of the round. Before the round started, the 8x multiplier gained from Chances had been applied to all the fields.

The first stop was The Angel, Islington, delivering a 24x multiplier. After that, Rich Uncle Pennybags went to Northumberland Avenue, where a 33x multiplier had been waiting. As the old man progressed, the multipliers got bigger, and on his next resting place, Free Parking, he got a 56x multiplier.

Roll number 4 took the old man to Coventry Street, which revealed a tasty 64x multiplier. Now, the final roll is usually reserved the biggest multiplier. The top multiplier of the round was 1,000x, but this time Lady Luck turned her back to players and made Monopoly Man go to Jail, failing to deliver the prize for the final roll. Even so, the final multiplier was a neat 176x.

Here you can watch the entire round. 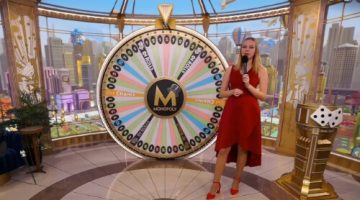